admin
ГРАМАДУ. БРАЗИЛИЯ.
Gramado is a city marked by many beauties, possessing exuberant natural wealth, being the largest tourist hub in the state of Rio Grande do Sul and one of the most important in Brazil.


The city stands out as a center of major events, in addition to hosting one of the most traditional film festivals in Latin America every year: the Brazilian and Latin Film Festival, popularly called the Gramado Film Festival or just Gramado Festival, during which Kikito prizes are distributed. Other important events that attract thousands of tourists are the Christmas festival known as Natal Luz and the Festa da Colônia, one of the most integrated festivities of the groups that colonized the region: Azoreans, Germans and Italians. For the Christmas event, between 1 and 1.5 million tourists are expected.

Another place worth visiting is the Medieval Museum, located in a medieval-style castle (which has been built for the last 30 years, exclusively by a single person, its owner), in addition to displaying medieval coats of arms, it also houses the unique Brazilian Cutlery Museum, displaying knives, swords, daggers, etc., from all over the world.

In addition to family and group tourism, Gramado has become a reference in business tourism. Due to this new niche, the city built a structure to house all types of activities. Gramado Serra Park and ExpoGramado are spaces that together add up to 35 000 square meters of area and that have enough infrastructure to host large fairs. Hotels such as Serra Azul and Serrano have convention centers with adequate equipment for holding panels and debates. In addition to these, the Festivals Palace can also serve as an auditorium and the Federal University of Rio Grande do Sul built its own Events and Training Center in the city.

Several events such as congresses and festivals take place in Gramado throughout the year. During winter, for example, there is Estação Gramado, the main event at this time of year. The city hosts other major events, such as the Gramado Film Festival, Natal Luz, as well as the Hydrangea Festival, Chocofest, the Fenim International Advertising Festival (National Fashion Industry Fair), among others. 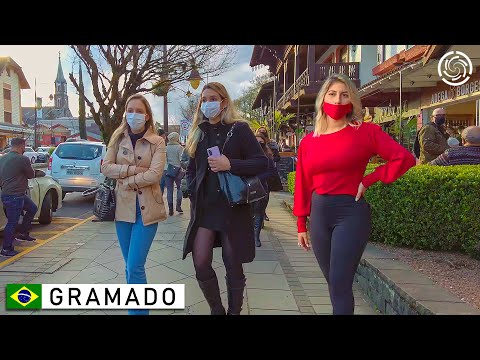 ГРАМАДУ. БРАЗИЛИЯ.Gramado is a city marked by many beauties, possessing exuberant natural wealth, being the largest tourist hub in the state of Rio Gr...